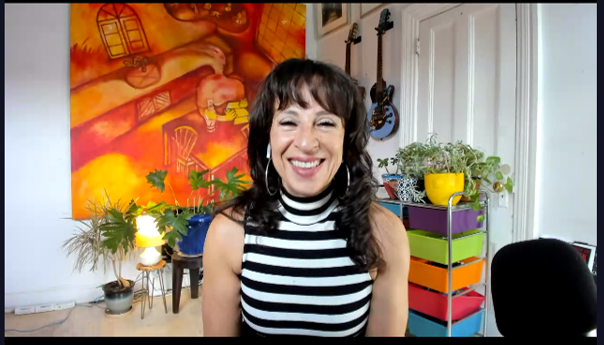 Emmy-winning journalist and self-proclaimed Democracy junkie Maria Hinojosa’s words stung like a paper cut, conjuring up my memories of growing up Black and invisible in a semi-rural white community. As she kicked off the fourth day of the 2021 Annual Convening, I found myself relating to the powerlessness she described of young Latinx children who consider themselves invisible. But I walked away emboldened by the fearlessness of a storyteller that dared us to be unapologetic in sharing stories that need to be heard.

She likened our country’s treatment of brown and Black immigrant and refugee children at our southern border to trafficking.

Hinojosa described her “obligation to reframe” migration and use of her privilege working in mainstream media to challenge white power structures to offer a different view of the world. Migration, she said, can be the story of a woman who chooses to migrate and crosses the dessert by foot with her children in pursuit of independence. This woman is more than a migrant, she’s a superwoman, the face of radical feminism.

As a veteran journalist, Hinojosa observed that mainstream media, largely controlled by white, heterosexual men, is a formidable power structure that decides what stories are told.

This only reinforces the need for us to work extra hard in encouraging young people and families of color to share their stories and claim their space. We can change biased narratives by being hyper aware of the destructive nature of stigma narratives and the damaging impact of word choice.

For example, Hinojosa never uses the term “minority” in her reporting because she would never use the phrase when talking to her children. Minority means “less than.” Why would we describe children of color as “less than?”  She also called out the use of “illegal,” my personal pet peeve when it’s used to describe an undocumented individual. How can a human being be illegal? I never understood the rationale behind this phrase until Hinojosa shared an explanation from a Holocaust survivor. He told her the first thing the Nazis did was to name Jews an illegal people. I fear people who embrace this language are unwittingly following in the footsteps of Nazis.

As the “storyteller in chief” for StriveTogether, I know we can do a better job in sharing stories centered in humanity and aspirations by making the invisible visible.

First, we need to shine a light on the web of systemic obstacles that trip up far too many young people and families of color. The invisible nature of structural racism baked into many of our systems will weaken as it’s examined more closely.

Next, we need to encourage those who have experienced systemic inequities – up close and personal – to share their stories. We need to provide safe platforms to spread these stories in a way that respects their dignity, centers our shared humanity and builds empathy.

Finally, empathy without action gets us nowhere. We must “match deep empathy with deep data and accountability.” Like Hinojosa described the work of her new investigative journalism unit, we must “unmask” the culprits perpetuating the inequities in our society.

While I have experienced the pain of being invisible, I have learned how to use the power of the pen. The desire to be seen and be heard led me to a career in journalism and eventually to StriveTogether. I plan to use the privilege of my position to encourage others to share their stories, claim their space and be heard. How will you use your privilege?

Update: Because writing involving race and ethnicity is often personal in nature, StriveTogether editorial style allows for flexibility depending on the preferences of the writer and story subjects. Not every member of a group will prefer the same language; in general, StriveTogether uses the terms preferred by the specific communities being highlighted. The language associated with race, ethnicity, gender, disabilities, age, income, religion and other identity markers changes, so you may note different terms being used in stories written at different points in time such as our StriveTogether shift from Latinx to Latine.

The network effect in action: Building pathways for postsecondary and employment success
November 22, 2022