The startling news broke, as it so often does these days, on Twitter.

Muneer Karcher-Ramos, director of the Saint Paul Promise Neighborhood, glanced at his Twitter traffic from a Capitol reporter on a Sunday afternoon and discovered that language funding local education partnerships, a project he and others had been toiling on for months, had been inserted into a conference committee agreement. And just like that, an underdog proposal by a brand new and unusual urban-rural coalition was alive and funded by a special session of the Minnesota Legislature.

This is a story about how Karcher-Ramos’ Saint Paul Promise Neighborhood, the Northside Achievement Zone in Minneapolis and three StriveTogether Cradle to Career Network partnerships from Greater Minnesota (outside the Twin Cities), with help from a few friends and some supportive legislators, scored a major legislative breakthrough for the students across the state. The Minnesota Legislature and the governor have agreed to provide nearly $6 million over the next two years for operation and pilot funding for the partnerships, making Minnesota the first state to make such an investment in these unique community groups.

It is a story about collaboration, working the grassroots and the grasstops, working across organizational, political, geographic and social boundaries, keeping common goals top of mind and never giving up. In its telling are some important lessons for other similar efforts in Minnesota and perhaps across the country.

Building a coalition throughout the state

It all started a year earlier when Karcher-Ramos and Sondra Samuels, president and CEO of the Northside Achievement Zone, got together to talk about ways to build their partnership.

“We knew we needed to be a statewide effort,” Samuels said recently. “There is power in numbers.”

At the same time, Growth and Justice, a Minnesota policy advocacy group focused on reducing inequality and building a more inclusive prosperity, had been helping coordinate communications between five StriveTogether groups from Greater Minnesota. Dane Smith, the president of the organization and a veteran political reporter turned public policy advocate, is passionate about the potential for Promise Neighborhoods and the StriveTogether collective impact model. 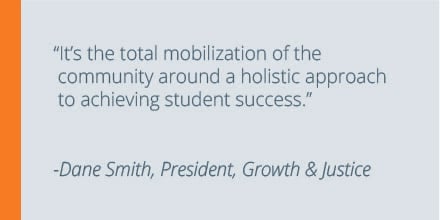 “It’s the total mobilization of the community around a holistic approach to achieving student success,” he said. “Not just schools, teachers and nonprofits but everybody: business, philanthropies, parents are involved. And not just early childhood or random and faddish interventions, but all the basic support we know kids need from birth to career launch, inside and outside of school.’’

Conversations between the groups began happening in the summer of 2014, creating a growing realization that the urban groups and the StriveTogether groups from rural areas outside the metropolitan area had a lot in common, particularly the way they focused on mobilization of resources from the community to support students from birth to career.

A political factor also came into play. The Minnesota House, with the election of a dozen Republican legislators from Greater Minnesota, turned from Democratic-Farmer-Labor Party (DFL) to Republican, owing almost entirely to flips in Greater Minnesota legislative districts. If the coalition was going to succeed, it had to cross both geographic and political boundaries and provide reasons for both parties to support it, the groups reasoned.

The data-driven, community-based nature of the groups would appeal to the newly elected Republican majority, Smith surmised.

In downtown Minneapolis at a November meeting and conference call, facilitated by Growth & Justice Policy & Research Director Maureen Ramirez and by veteran lobbyist Nancy Hylden, the partners acquainted themselves with each other and kicked around the idea of a coalition to seek state funding. They agreed to keep thinking and working together and agreed to meet again.

Divide and conquer: Growing support in the state capitol

In March, in Red Wing, about an hour southeast of the Twin Cities, the group gathered again. “We went around the room asking, ‘Are you in?’” Karcher-Ramos recalled. “Everyone said, ‘Yes, we are in.’ Everyone put staff capacity and organizational skin in the game.” 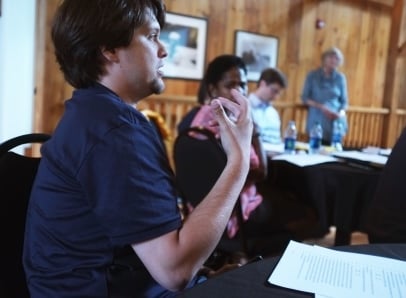 Now the hard work began: convincing the Legislature and the governor that these disparate groups from all around the state had a workable, data-driven, organized plan to attack Minnesota’s student opportunity and achievement gaps.

They divided up into teams: advocacy/lobbying at the Capitol; community engagement with parents and others at the Capitol; technical working on the language of the bill; grassroots and grasstops in individual communities and centers of influence and more. Growth & Justice helped organize testimony. The coalition checked in by conference call every week and emails flew back-and-forth daily and on weekends.

The efforts began to pay off. At a House committee hearing, the chair asked about supporters of the bill. “Everyone stood up,” Karcher-Ramos recalled. “Forty to 50 people at an 8 a.m. hearing on a Thursday.”

Not only did parents show up at hearings and testify, they created unique ways to educate and thank legislators through artwork, huge cards and videos.

“I could not believe the number of people at an 8 a.m. hearing to tell their story. That was very impressive,” said Rep. Tim Kelly (R-Red Wing), who was a big supporter of the project and the chief House author of the legislation. “That effort made an impression on me.”

One of those parents was Arviance Bryant of St. Paul, who has two children in the Promise Neighborhood programs.

“I believe the parents did make a difference,” she said. “We came down there to prove something; our voice was heard and we made a positive difference. I’m proud of what we accomplished and I am proud we can say we are looking out for our children’s future.”

Working at the grassroots and grasstops, all the way to the governor’s desk

At the same time, Kate Mortenson, a Minneapolis philanthropist and advocate who is involved with NAZ and Saint Paul Promise, and Scott Jones, of Red Wing’s Jones Family Foundation and active with Every Hand Joined, worked the grasstops: political, business leaders and professional leaders, convincing them of the value of the partnership project.

Mortenson viewed their roles as “catalyzers and accelerators,” making sure that community and state leaders understood the significance of the coalition for the state. They were able to get the heads of five Chambers of Commerce to write a supporting letter, saying the project was good for business, for example.

“I feel good about the unique and distinctive role that grasstops played,” Mortenson said. They needed both the grassroots and grasstops, she added. “The work was truly inspiring.”

Their work was driven by the passion and mutual commitment of the coalition members, she said. “We had a hashtag ‘Big Idea.’ A small investment for a big idea. It was something for the Legislature to understand and embrace.”

“The groups from the cities and greater Minnesota banded together over what they had in common,” Mortenson added. “That unanimity of purpose was really important.”

Karcher-Ramos got a call from Patrick Ness of the Wilder Foundation in the middle of a Saturday night in May telling him that no new money was included for any of the initiatives in the final compromise bill. As it turned out, Governor Mark Dayton, a DFLer, vetoed the education bill because it lacked the funding he wanted for universal pre-K programs.

But his veto actually provided a reprieve for the proposal, in part because the governor had heard about it late in the session at a meeting at a St. Paul school.

“He was surprised by and interested in the urban/rural partnership,” Smith said. “He already supported the urban partnerships, but he was really intrigued when he heard us talk about the how the coalition was also seeking funding for similar efforts in Greater Minnesota. He requested more information and we emailed it to him at once.’’

“We were in; we were out; we were out again and then we were in,” said Jones of Red Wing with a smile.

And that’s when Karcher-Ramos saw the news on Twitter about the Education Partnership Fund finally making it out of a conference committee. The special session of the Legislature, after lots of wrangling over a host of other issues, passed the proposal and Gov. Dayton signed it. The bill contained line-item funding for the five urban and rural partnerships. The urban units will receive $1.2 million each for each of the next two years, and the Greater Minnesota partnerships will receive $167,000 apiece each year.

Rep. Paul Thissen, DFL-Minneapolis and the House minority leader, said that despite a moment of concern when the funding was left out during the regular session, he was confident the funding would go through. “I had spoken to the governor to emphasize this was my priority for 2015 and he strongly agreed,” he said. “I was pleased the governor made it a clear priority in the special session.”

Rep. Kelly said that he and other Republican legislators believed they were being asked not for a “handout from the state, but being asked to participate in something that is already working, to enhance and grow what the community does.”

He added that legislators believed the entire state would benefit from the collaboration.

“If it’s working, it will get bi-partisan support,” Rep. Kelly said.

A bright future ahead

Rep. Thissen, the DFL leader in the House, agreed that the Education Partnership Fund can continue to have backing from both parties.

“It works and individual programs can adapt the program to their local needs,” he said. “The most important thing is that the practical success of the program does not run into ideological opposition to government funding generally.”

“We always hear about the cities competing with rural Minnesota, but we came together to achieve positive outcomes for children and families throughout the state,” she added. “Rural and urban folks can work together. We are the first state to make this happen. It’s very innovative and creative.”

The coalition partners, while ecstatic about their successes, are busy planning next steps at the Legislature and also ways to achieve their common goals of kindergarten readiness, third-grade reading, high school graduation and college and career readiness. They are looking for ways to compare data and share successes. And they are thinking about how to expand to include other StriveTogether Cradle to Career Network members in greater Minnesota. With these new areas of focus, they now call themselves Education Parnterships Coalition.

Smith, who recently described the Promise Networks and StriveTogether efforts in an op-ed in the Minneapolis Star Tribune, said: “The beauty of these groups is the affirmation of the communitarian way Minnesota does things.”

Back at her North Minneapolis office, Samuels conceded the group didn’t really know if the Legislature would come through. “But we are thrilled by the outcome and the real winners are the children of our state.” She noted that people from all over the country are watching what happens in Minnesota.

Bruce Watkins, a former school superintendent in St. Cloud, north of the Twin Cities, and now active in Partner for Student Success, summed up the coalition effort this way: “I feel kids are the future of the community and the economy. To have them well-educated and well-trained bodes well for the future of Minnesota. Not to do that would be disastrous.”

Lessons Learned: What we can learn from Minnesota

The coalition partners, despite the long hours and the ups and downs of the legislative process, were obviously pleased with the results. But what did they take away from the process for the next time or for others in Minnesota or in other states and communities? What are the lessons learned?

Other education funding by Minnesota Legislature: